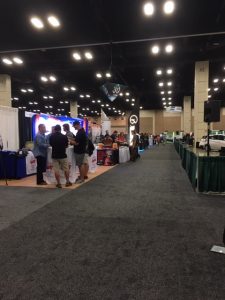 The show floor was packed with vendors on the first day of WFCT.

The International Window Film Conference and Tint Off™ (WFCT) is jam-packed with events, but one of the biggest draws is the sponsor booths, which are packed with the latest products. With many new products, and also many tried and true ones, the vendors at WFCT have already seen a lot of success and interest.

SolarGard promoted its new dealer app which has a lot of new features, including assistance for dealers in generating estimates and sending literature to potential customers. The company also promoted its safety and security product, ArmorCoat.

“We are definitely getting more interest in these types of products,” says Gary Clark, business segment manager. “And it’s not just for schools, but for healthcare applications as well.”

Apollo Window Film is featuring its window films, specifically their new Ultra CSX Carbon Ceramic Series. The company also has a team member competing in the automotive tint-off competition, and is promoting the fact that its products are made in the USA.

Wintech Window Film Technology is showing its xenium carbon film which includes the X200 and X900 window film. These contain no metalized layers and won’t interfere with electronic signals, according to the company.

Many companies are here to showcase their paint protection products and that includes DuraShield Paint Protection Films. This stain resistant, self-healing film is user friendly and comes with a great warranty, the company says.

In addition to window film, some sponsors also showed off tools and other components vital for the window film dealer.

WFCT runs through Saturday at the Henry B. Gonzalez Convention Center in San Antonio. Stay tuned to windowfilmmag.com for more videos and stories about the products at the conference.