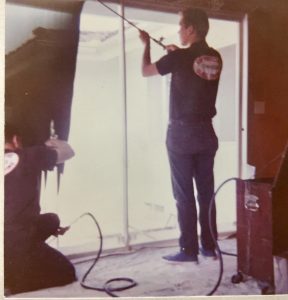 Bamburg has been working hard from when he started almost 70 years ago up until today. 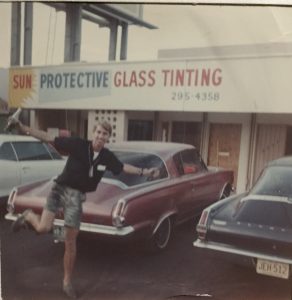 Having fun at work back in the day.

Richard Bamburg, Owner of Pro-Tech Concepts in West Monroe, LA, has been in the window film industry for nearly 70 years. Though at 87 he still comes into the office where he works alongside his son, Lance, he will tell you he retired in the ‘80s. With that impressive track record, he undoubtedly has a great deal everyone in the film industry can learn from. Check out Window Film’s interview with Bamburg, who doesn’t show signs of slowing down.

You’ve been in the tinting industry since 1951; how did you get your start?

I started in September of that year—back in the liquid flow coating days—and we [Sun Protective International Corp.] were manufacturing the liquid and setting up dealerships across the United States. When the films first came out in 1958 or 1959, [manufacturers] were making nothing but silver films or mirror films. Martin Processing was making films for other purposes, so we took that film, and made a new purpose for it.

But I got into the tinting industry partly because of my grandfather. He was a research chemist, and he did a lot of research on the product itself—liquid flow coating, that is.

You’ve seen the industry develop over many decades. What do you believe has been the biggest change?

For me, I’d say the biggest change was going from liquid flow coatings to films. It made flow coating obsolete. It’s so much easier to apply and does a much better job of blocking UV rays.

I’d also say consumer awareness. When I first started, the process itself had never been heard of it. Now, people pretty much know what window film does.

Which project stands out to you most?

The first big job we ever had, which was the General Dynamics building in San Diego. We tinted all of the windows there. That was in 1961—the same year the first human was shot up into space for the first time.

We had about 30 installers working on the installation; it was a big project. The first time we completed the installation it was with liquid flow coating, but the second time we used solar film.

What’s been the most rewarding part of being in this industry?

Getting to meet new people from all over the world. We had people coming to see us from foreign countries every week when we were in San Diego, and that’s been one of the most interesting parts.

Now, I enjoy seeing first time reactions from customers that still do not know anything about window tinting, especially the residential type.

You and your son operate Pro-Tech Concepts together. When did he get involved in the family business?

What advice would you give to other dealers?

Keep your customers happy. And to do that, you have to give them what they ask for. Don’t tell them a bunch of lies, be truthful with what the product actually does and what it doesn’t. I think that’s the biggest mistake—dealers promise the moon by telling customers that window film blocks 100-percent of fading when it doesn’t do that. It does a percentage of that, but the biggest mistake anyone can make is overselling the product.

You planned on retiring 34 years ago—what motivates you to go into the shop day in and day out?

Any plans on retiring?

They’ll have to take me out feet first.