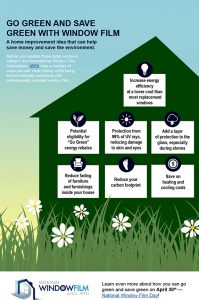 National Window Film Day (NWFD) is April 30, and the window film industry is wasting no time promoting it as it gains traction across the globe. Governors and mayors across the United States are also issuing proclamations for this day as well.

The International Window Film Association (IWFA) has been instrumental in helping tint shops advertise the day, which is intended to help educate the public about the benefits of professionally installed window film. The IWFA offers its members templates for press releases, social media posts and outlines for articles to submit to local newspapers, and members are stepping up. Not only are local media outlets such as Hawaii News Now, picking up the story, but individual tint shops are helping spread the word and several are taking up the IWFA on its suggestions for using social media to do it.

Madico and Transform Window Film out of Wrexham, in the UK, have both been using the hashtag #windowfilmday on Twitter, and at least five tint shops are using a version of it on Instagram. 3M dealer Solar Tint in Cincinnati, Rayno Window Film from Elk Grove Village, IL, Locust Grove, GA-based Garcia Pro Window Tinting, Solar Art Window Film from Irvine, CA, and Pro-Tint Inc., out of Concord, NC, are using the platform – and their company projects – to advertise information about the day. And on Facebook, National Security and Window Filming in Oak Forest, IL, is promoting the hashtag and telling potential consumers and building owners: “This is one you shouldn’t miss if you care about energy savings and keeping your commercial building efficiently comfortable.”

Nu-Vue Window Films out of San Diego, CA, can be found on YouTube in a segment on the Approved Home Pros channel, where company founder and CEO Gregg McKay told audiences of The Approved Home Pro Show (a local, weekly radio and television show about home improvement and home maintenance) all about National Window Film Day. He brought samples to explain in detail the benefits of window film, including interior fade resistance and safety and security options.

Brigid O’Leary is a contributing writer for Window Film magazine.