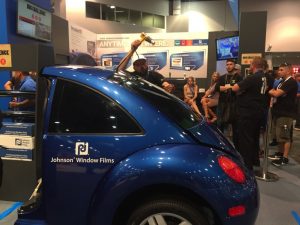 The 2017 SEMA Show started its four-day stay at the Las Vegas Convention Center yesterday, with international representation from more than 3,000 exhibitors and tens of thousands of attendees. As one of the largest automotive aftermarket tradeshows, several film manufacturers used the show to debut new products, while another says goodbye to one of its SEMA traditions.

For the last decade, Johnson Window Films has held its Bug Challenge, which challenges attendees to beat the clock on a VW Beetle installation using the company’s window film.

“This will probably be the last year of the Bug Challenge,” said Spencer Robley, training coordinator at Johnson Window Films. “We’ve been holding this challenge for ten years, and it’s always a crowd-drawer, but we don’t want time to trump quality. So, this year, it’s all about quality.”

The company showcased its nano-ceramic IR film, which was well-received by show-goers, Robley said. “It’s only the first day, and we’ve gotten a lot of good responses regarding our IR film,” he said. “We’re really happy with the loyalty of our customers, and we think it’s going to be a great show for us.” 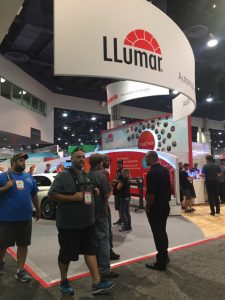 The paint protection film (PPF) market makes up a small fraction of the show, but it’s quickly gaining traction with plenty of room for growth. At this year’s show, Eastman Chemical Company announced a multi-million dollar investment into improving its capabilities in this area by launching the Performance Films Pattern and Software Design Center to support its LLumar and SunTek brands.

The new center includes the addition of new vehicle patterns and improved software functionality, according to the company.

“The show has been fantastic,” said Travis Smith, vice president of advanced materials and performance films at Eastman. “SunTek has a lot of product interest. But for LLumar, we’re continuing to improve on our marketing front. The work we’ve done on our digital front has been great—we’ve seen a 115-percent increase on dealer leads.”

In addition to the announcement of the Performance Films Pattern and Software Design Center, SunTek used the show to introduce CoolSight 90 Clear, a nano-ceramic window film that doesn’t alter the look of a vehicle’s window.

The product has an 84-percent visible light transmittance (VLT) and a 99-percent ultraviolet (UV) protection. According to the company, a major benefit of the film is that it meets VLT requirements in states that allow windshield applications. 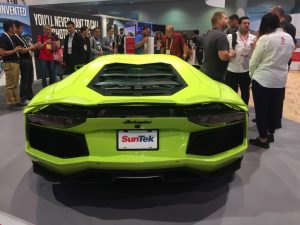 SunTek introduced a new film that doesn’t alter the look of a vehicle’s window.

LLumar focused on its dealer marketing and digital campaign, but a huge attraction to its booth was its latest self-healing PPF, LLumar Platinum, and its new cutting software. The product features Hydroguard technology, a hydrophobic clear coat which works by preventing water and debris from embedding into the film.

Stay tuned to WindowFilmMag.com to get more information on these companies, as well as other manufacturers, as we continue our SEMA coverage. If you’re at the show, stop by our booth #12624 and meet our staff!

The show will be held through Friday, November 3 at the Las Vegas Convention Center.