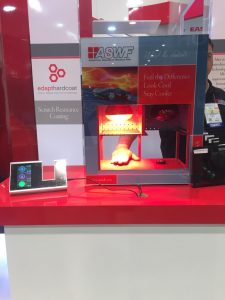 The 2017 SEMA Show continued its four-day stay in Las Vegas Thursday with attendees ready to check out the latest products in the film industry. Despite reports from manufacturers saying attendance seemed lower than previous years, they said booth traffic and leads were up.

“We’re getting tons of leads at this year’s show,” said Jim Mull, regional dealer representative at ASWF. “When people come by and test out the new film, they’re shocked; they can’t believe how well it performs.”

The company had heat lamps and a meter for show-goers to test out the new film’s capabilities on display.

“The show’s been awesome; we’ve had a lot of traffic these past few days,” said Mark Carlson, president of Edge. “It’s great to see old friends/competitors. This is where a lot of new relationships get started. It’s pretty much like scan a badge and you’ve made a new best friend.” 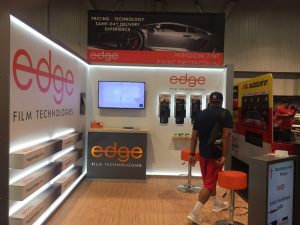 This is Edge Film Technologies’ first time exhibiting at SEMA.

Edge is still a relatively new brand, Carlson explained, but said part of what has made its presence at the show successful is that it was established by industry veterans. “I think what people notice about Edge is that even though it’s a new brand, it’s supported by people that are already established in the industry and dealers already know,” he said.

The buzz at Global Windows Films’ booth was its focus on its dealer campaigns, which provides installers with the right marketing materials. To get the campaign started, Global released new sign displays for shops, which highlight the differences in VLTs and specs of the films in a consumer-friendly format.

However, the company’s newest automotive film, QPD Ceramic, which is designed for windshields, also brought in a lot of traffic.

“The product was made more for international customers and states that permit windshield applications,” said Abhishek Joshi, head of business operations at Global. 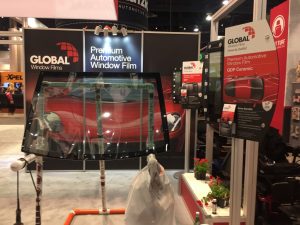 Global Window Films is focusing on its dealer campaigns.

Stan Foster, a Global representative conducting installation demos, noted that even though attendance seemed lighter, it was the best SEMA show the company has had in years.

“I’ve been to SEMA every year over the last decade, and this has been the best show in years and years and years,” Foster said. “We rebranded our logo and changed the look of our booth, and we’ve gotten a lot of interest. It’s all been good.”

Stay tuned to WindowFilmMag.com for more information as we continue our SEMA coverage. If you’re at the show, stop by our booth #12624 and meet our staff!

The show will be held through Friday, November 3, at the Las Vegas Convention Center.