In late August into early September, Window Film magazine reported that Hanita Coatings had been acquired by Avery Dennison Corporation. The announcement has been made official by both parties as of Tuesday, December 13.

The first report, which was released on an Israeli news site in late August, was released to the media by an undisclosed third party who was at the meeting of the two companies. “Unfortunately, a third party leaked information to the Israeli media,” explains Oved Shapira, CEO of Hanita Coatings. “It wasn’t official yet, so we decided to ignore the news. Now it’s a binding and legal agreement.” 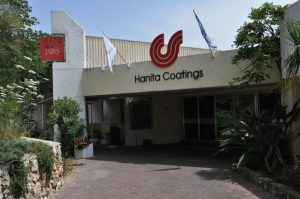 The entrance to Hanita Coatings in Kibbutz Hanita, near the northern border of Israel.

Avery Dennison acquired 100 percent of Hanita Coatings’ assets from kibbutz and Tene Investment Funds for the purchase price of $75 million, subject to customary adjustments. According to Shapira, the two companies will operate together but are still in the process of figuring out the details, but he says, “We will maintain management and operation in Israel, but I think what we’re talking about [the acquisition] is good news, for window film in particular.” He continues, “This will be a big stepping stone for Avery Dennison to enter the window film market.”

Headquartered in Israel with sales and distribution facilities in the United States, Germany, China and Australia, Hanita develops and manufactures coated, laminated and metallized polyester films for a range of industrial and commercial applications. Avery Dennison plans on maintaining all of Hanita’s employees both at headquarters and abroad.

Shapira adds, “The R&D and the innovation produced, the DNA of Hanita, was a big driver for Avery Dennison to acquire Hanita.” With the acquisition, Avery will have access to Hanita’s patented technology that allows the company to have high-quality solutions equivalent to sputtering (a process that applies an alloy coating to achieve superior film performance), but at a low cost. The technology allows the company to cover three to five meters per second, a rate much faster than sputtering.

“We see clear opportunities to leverage our strong global organization and established brand to help accelerate Hanita Coatings’ product commercialization around the world,” says Mitch Butier, president and CEO of Avery Dennison. “In addition to expanding our product portfolio and providing new growth opportunities, Hanita Coatings’ culture of innovation and long-standing commitment to R&D are a strong fit with our own company’s 80-year history.”

With 2015 sales of roughly $50 million, Hanita currently employs more than 220 employees, most of whom are located at the company’s headquarters in Israel’s Western Galilee. The 33-year-old company generates sales in more than 40 countries.

“We are excited to be joining forces with such a global industry leader and see it as a great opportunity for Hanita Coatings to realize its full potential,” adds Shapira. “I am convinced that Avery Dennison’s resources, distribution channels, and brand will benefit our customers across all our markets, enabling continued innovation through future investment and improved manufacturing efficiency.”

According to Shapira, the closing of the transaction will only be a few more months, subject to customary closing conditions and approvals.