SEMA draws in high numbers of attendees, and some are window film dealers from around the world looking for the latest technology and newest products in the automotive industry. On the second day of the show, WINDOW FILM Magazine caught up with a few leading industry manufacturers to see what products they were featuring.

Travis Smith, president of performance films at Eastman Chemical Company, touched on both of the company’s brands: LLumar and SunTek.

LLumar drew in large crowds waiting to get their chance to race Danny Munoz, one of WFCT’s winners, at shrinking film on an East Coast Customs car, but the focus of the booth was its continued 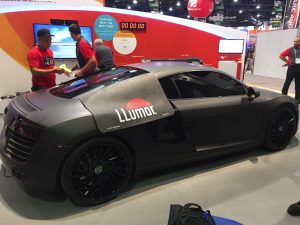 investment to build upon its consumer research and consumer understanding.

“We’re building on that this year to start talking about how do you get them [consumers] in the shop?” he said. “So, the marketing materials that we’re doing, building on those consumer research and insights and then leveraging that with our dealers to really up their presence on the digital platforms that are available.”

“So this year at SEMA, one of the things we’re really focusing on is the industry leading capability of SunTek PPF,” said Smith. “I think it really sets the bar in terms of performance, in terms of how it installs, in terms of durability, the look, the appearance.”

Abhishek Joshi, general manager and head of business operations, said the automotive film was gaining a lot of attraction from consumers, and how pleased he was at the interest the company

Echoing that sentiment was Hanita’s vice president of window films business unit, Sergio Shmilovitch, who said its new window film NR Sigma Pro was also a fan favorite, which was revealed at this show. 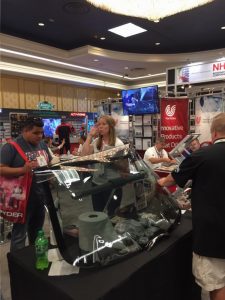 “We’ve had a lot of people coming here to our booth, trying out our films, getting a lot of information—a lot more than expected, and we’re very, very happy about that,” he said.

NR Sigma Pro is a non-reflective film that delivers solar performance and color durability and is available in a wide range of VLTs.

“We’re very excited about this product, it’s going to be our main product in the U.S.,” said Shmilovitch.

To hear more from these leading manufacturers as well as others, be sure to watch our latest episode of FILM’d, and stay tuned to WindowFilmMag.com for the latest industry news.