Customize and Protect Your Ride

Wraps and paint protection films (PPF) are making a lot of headway in the window film industry, and the attention those manufacturers saw during SEMA proves it. Interest is always high when it comes to customizing and protecting your ride, and wraps and PPF make it easier than ever. 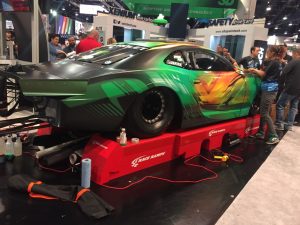 Avery Dennison has steadily seen crowds throughout the show, as people gathered to watch the team wrap a sports car in many of the company’s new finishes. Being highlighted was the new Color Flow series and its new digital film, MPI 1105.

“The installers are so creative. They take our film and find out new ways to work with it to really up the gain,” said Carolyn Polanski, marketing communications manager. “They’re continually finding ways to advance the industry. We are trying to meet those demands, come up with the newest films so that they can best work with their imagination.” 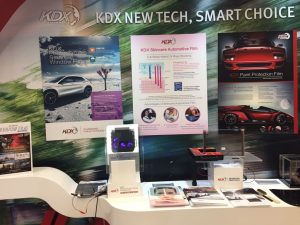 The company’s new digital film allows the customer to completely customize the wrap design. And as Polanski said, your imagination is your only limit.

Last year, matte finishes were highly sought after, but this year, color shifting films have become the fan favorite. Sunset Shift, one of Orafol’s new wrap colors designed by Will Castro of Unique Designs, had everybody buzzing.

“Ever since we released our shift effect films last year, we’ve had a tremendous amount of attention because that hasn’t been done in wrapping films,” said Craig Campbell, graphic products market manager. 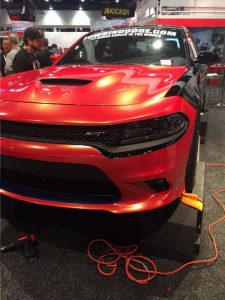 Manufacturers are really expanding their product offerings with PPF, and KDX Window Films is no exception. The company used the show to debut its new paint protection film.

General manager George Li said its PPF has a strong self-repairing performance and heals immediately. It’s equipped with a special top-coat that’s anti-dirt and anti-chemical, which allows the film to self-heal at room temperature.

With more manufacturers getting into this growing market, Jamie Werner of PremiumShield touched on some of the latest trends he’s seeing.

“New trends for PPF, right now, are basically steering towards self-healing. But we’re seeing more new people coming into the business from other different industries,” he said. “First industry that’s had a huge amount of growth is the detailing industry. They’re touching a lot of cars, they see the upsell potential, and they could definitely get the high-dollar amounts for it.”

Stay tuned to WindowFilmMag.com to get the latest updates from SEMA.