In an effort to curb the estimated $50 billion annually that energy leakage through windows cost building owners, the U.S. Department of Energy (DOE)’s Berkeley Lab seem to have synthesized what they call a potential solution. Researchers have developed a polymer heat-reflective coating that can be painted on at one-tenth the cost, lab officials say. 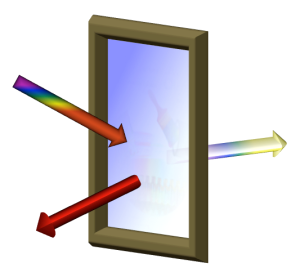 When sunlight hits a window coated with Berkeley Lab’s heat-reflective coating, the visible light will be transmitted while the infrared portion of the spectrum is reflected. (Credit: Garret Miyake, University of Colorado)

“There are retrofit window films on the market now that have spectral selectivity, but a professional contractor is needed to install them, a barrier for many building owners,” reads a post by Berkeley’s science writer Julie Chao. “A low-cost option could significantly expand adoption and result in potential annual energy savings of 35 billion kilowatt-hours, reducing carbon dioxide emissions by 24 billion kilograms per year, the equivalent of taking 5 million cars off the road.”

The coating will be a do-it-yourself retrofit—at least that’s the vision, says scientist Raymond Weitekamp—and it will do almost exactly what film does.

“The coating will selectively reflect the infrared solar energy back to the sky while allowing visible light to pass through, which will drastically improve the energy efficiency of windows,” he says. 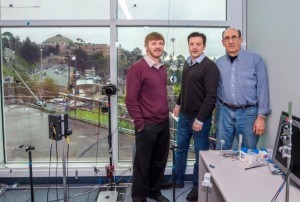 A team of Berkeley Lab scientists is receiving part of a $3.95 million award from the DOE’s Advanced Research Projects Agency­–Energy (ARPA-E) to develop this product.

The Berkeley Lab technology relies on a type of material called a bottlebrush polymer, which, as its name suggests, has one main rigid chain of molecules with bristles coming off the sides. This allows the person applying the liquid to apply it evenly.

For the ARPA-E award, Weitekamp is collaborating with Berkeley Lab’s Steve Selkowitz, a leading expert on building science and window technologies, and Arman Shehabi, an expert in analyzing energy use of buildings, to develop a cost-competitive and scalable product. Their target cost is $1.50 per square foot, which they say is one-tenth the current market cost for “commercially-installed energy efficient retrofit window coatings.”

“ARPA-E invests in high-risk, high-reward projects,” Shehabi says. “The high reward in this project isn’t in the performance improvement. It’s transformative in how windows could be retrofitted—it’s something you can do yourself. The market need is very large, and there’s nothing low-cost out there that meets that need.” 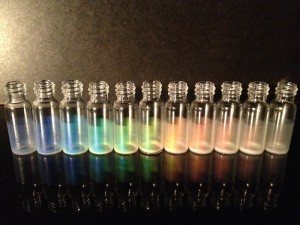 Berkeley Lab’s paintable window coating is based on brush block copolymers that rapidly self-assemble to photonic crystals, which are easily tunable across the entire spectrum of solar energy. (Credit: Garret Miyake, University of Colorado)

One of the technical challenges remaining is to improve the reliability of the material, because as it stands, when infrared light is strongly reflected, the visible light can be scattered or hazy. When that’s achieved, it will allow the coating to reflect the majority of the sun’s energy, reducing the amount of heat passing into a building, while still appearing clear to the eye.

Shehabi will be developing building simulation models and lifecycle assessment models to understand how this technology would impact energy use in buildings and how energy savings could be maximized. He’ll also be using certain models to look at things like manufacturing considerations and a general payback period.

“This was originally an exploratory synthetic chemistry project, but having the deep windows and building expertise on the applied side here at Berkeley Lab, we thought, we can do this in a bigger and better way,” Weitekamp says.