On Sunday morning at 3:30 a.m., Doug Templer is usually asleep. This Sunday was different, however, for the owner of Medford, Oregon-based Sun Scape Window Tinting—as the cops were alerting him that a drunk driver had damaged his business. 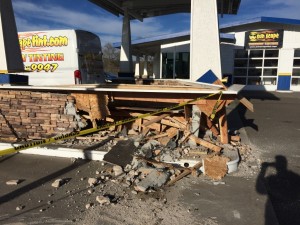 This picture was taken by Templer after the accident on Sunday morning.

“The police showed up to my house and told me there was an accident at my shop,” Templer says. “They were trying to get information regarding the business owner.”

KDRV reports that Tyler Banuelos, 22, was twice over the legal limit when he crashed into the carport of Templer’s business. He fled the scene but turned himself in later that night and was arrested for driving under the influence of intoxicants and other crimes.

Templer’s cameras at his shop provide a direct live feed to his house and was able to see the tow truck taking Banuelos’ vehicle away. On Sunday morning he had to clean up the mess–he’s usually closed.

A view of the crash’s aftermath from the side.

Located at an old gas station, the Templer had beautified the carport with bricks and foliage. He’s not sure how much it will cost to replace yet, but he says it’s quite damaged.

“I would imagine that guy was going at least 40 miles per hour when he hit that,” he says. “The post will have to be replaced–it’s cracked up beam and bent.”

Templer says he’s learned a few lessons from the incident.

One is regarding where he chose to put his business.

“It’s dangerous having your business on the main road,” he says. “Be aware of your surroundings,” because this is the second time he’s had an incident happen at that same spot.

He also now swears by the investment he made in the surveillance. While he initially got them for insurance if his customers told him he messed up their cars, they more than served their purpose here.

It really is not that expensive,” he says, noting he paid $650 for eight Lorex cameras from Costco. “It was completely worth the investment – hands down, no questions asked.”

Below is the news report with video of the crash: