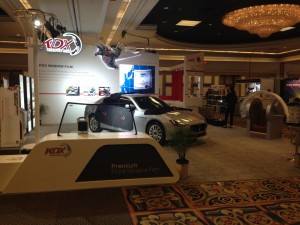 KDX’s booth was on point, complete with a security film test and a 3D rendering of their manufacturing facility.

Day three of SEMA brought a lot more than three bullet points to be shared, but at this point, it’s become tradition. Here are day three’s standout:

Many manufacturers new and old to window film are at SEMA because of distributors. Whether it’s that they’re exhibiting alongside their distributor, as is the case with Huper Optik, or they’re here primarily to make connections with U.S.-based distributors, it seems snagging a partnership with a good distributor (rather than a few tinters) is on the forefront of a lot of suppliers’ minds.

2) The Booths Are Beautiful

A lot of work goes into the booths here at SEMA. After all, who wants to visit a company with a plain booth? I want to recognize some that were particularly engaging.

Greg Duchinsky of DuraShield told me he’d been working on his “home-grown” booth for more than a month. It’s really paid off as the booth looks excellent. The branding of the company’s Titan XT PPF seems to be burned into my memory more than many other products because of the impressive booth.

The company’s splitting its booth with another Saint-Gobain subsidiary and it’s really paid off. The bright whites and the sleek-looking tables, uniforms, etc., make the booth look like a place where serious business gets done.

This event is the first time I’ve met the China-based window film manufacturer, and even though its booth isn’t in the North Hall, it was hard to miss. The company’s branding is second to none and its representatives have been able to pull in a lot of leads using a unique security film demonstration. Passersby can drop very heavy metal ball through a shoot onto a piece of glass with their 8-mil security film. It’s been a great way to start conversations, said marketing director Yolanda

Eastman went through a whole redesign this year, exhibiting SunTek and LLumar in the same square footage. The designers did a good job of making sure both brands were represented together while having a distinct separation at the same time.

XPEL’s booth is noticeably bigger and better than last year’s. With three high-end cars exhibiting the company’s clear and matte-looking paint protection film, the foot traffic at the booth has been nonstop.

3) SEMA is Not for Architectural Tinting

It’s always nice to see companies I don’t have the opportunity to see anywhere else, but I feel like that shouldn’t be the case. Here at SEMA, many companies incorporate their architectural film offerings into their booths, but this really isn’t the show for that. Yes, there are tinters who work in the architectural sector here, but really this show is more about getting restyling shops that want to offer tinting to choose your automotive film over the competitors’. It baffles me that film suppliers would use SEMA to promote their architectural film while completely skipping the International Window Film Conference and Tint-Off™, which is smaller, yes, but at least nearly 100 percent of the event’s attendees are solid leads.

That’s what I have for today’s SEMA update. There’s one more day of the show to go. Fridays are historically less busy, but each year organizers try to find a way to make sure foot traffic keeps flowing. We’ll see if that’s the case this year.