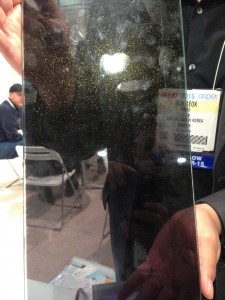 Korea-based Filink’s new gold Pearl film line. It has the “twinkle” effect on the outside but looks like standard film from the inside.

Today, it rained in the desert. There was also some decent-sized hail falling from the sky. But even that couldn’t keep business from happening. Here are a few things I picked up on during the SEMA Show’s second day.

So yesterday I told you about how the show floor is packed with entrepreneurs checking out the latest products, but they’re not just window shopping. Mark Imbrock of EDTM told me he sold four of his top-end glass test equipment kits on the first day, Jeffrey Plummer from Madico told me they had beef up production because the product was “flying out the door” and Daniel Lee of Solar Free Window Film said the company’s Sentry line has exceeded the company’s goals.

Valdemar Viana, CEO of the Portuguese franchise Vpeliculas, has to be one of the most dedicated people in the entire window film industry—and it’s paying off. Since first meeting him at last year’s International Window Film Conference and Tint-Off in Baltimore, I’ve met him on three other occasions: last year’s SEMA, last month at WFCT in Reno and today. Viana has 21 Vpeliculas franchises in Portugal and a goal to be much more international soon. He already successfully started 12 operations in Angola, which he sold, and plans to open 57 in Spain, which he says he will do over the next two years. Wow. He’s also in talks to launch locations in the U.S., which he says is a two- to three-year goal. We’ll be keeping an eye on this one.

3) Window Film Can Be Diverse, Too

Each year, we like to spend a day checking out products that window tint shops could add to their offerings and profit margins, such as wraps and PPF. Today’s newscast does just that, but there’s also a company trying to diversity its window film.

In an effort to stand out from the crowd, Korea-based manufacturer Filink launched its Pearl Film, which offers an “exterior pearl twinkle effect.” Like—it sparkles. It may sound bizarre, but after seeing it, I think the product could catch on, especially after feeling its heat rejection quality with my own hands.

“All films are almost the same. We wanted to bring something new to the industry,” said company representative Jun Seok Choi. “This took a lot of research to make happen, but we wanted dealers to have new products to buy.”

The product is 100 percent ceramic, comes with a 10-year warranty and is patented worldwide so no one else can have a product like it, Choi said. It also can come in “any color sparkle you want.”

Day two was a success, and there are two more days to go. Make sure you watch today’s newscast to find out all about how you can get our new, exciting publication PPF Mag. We’re about serving your business here, and we know our new magazine will do just that. If you’re here at SEMA, come say hi! We’re at booth 12460.