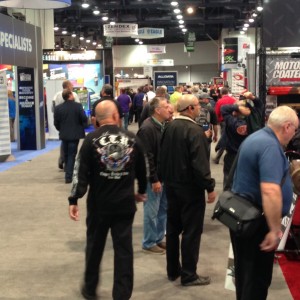 At this year’s SEMA Show, foot traffic seems to be even heavier than last year.

A total of about 150,000 people have descended upon Sin City this week (at least that’s what my cab driver told me)—all in the name of the automotive aftermarket.

Today was honestly one of the rougher days of my Window Film magazine tenure. Despite trying to stay up until a decent time to adjust better to West Coast + daylight savings time, I woke up bright and early at 4:00 a.m. and could not get back to sleep. I also lost a dress shoe and ruined a shirt while ironing it.

But even though I felt like a zombie, there were a few first-day takeaways that even a zombie couldn’t help but notice in the North (window film) Hall.

I’d like to say everyone knows this, but it was even more apparent in the halls. The paint protection film (PPF) industry is starting to steal the show rather quickly. Every PPF-only exhibitor had a larger presence than last year and window film manufacturers are putting more focus on the product than ever. Thus, we’re starting a magazine dedicated exclusively to PPF. More on that to come in tomorrow’s newscast—stay tuned!

There’s nothing I’m more conflicted about at these shows than coming to a stop in the crowded halls due to foot traffic. It excites me knowing the industry is doing so well that the largest convention center in Las Vegas can’t provide enough walking space for attendees, yet annoys me because my days are usually busy with minute-by-minute appointments and I cannot afford to stand in a foot-traffic jam. Still, I’d rather see the halls that packed than not.

3) The Window Film Market is NOT Saturated

At least that’s what new suppliers/exhibitors would like to think. Our leading story today was how DUB is launching a window film line. The company, known for its consumer-facing DUB magazine, thinks it will have an upper-hand in the battle for market share due to its consumer awareness. Time will tell.

We look forward to bringing you more SEMA action throughout the week. These were just my day one observations. Daily updates will be provided via our Facebook, Twitter and, of course, on windowfilmmag.com.