3M Goes Back to the Future, Wraps, Tints a DeLorean

Marty McFly: “Are you telling me you built a time machine out of a DeLorean?”

Doc: “The way I see it, if you’re gonna build a time machine into a car, why not do it with some style?” 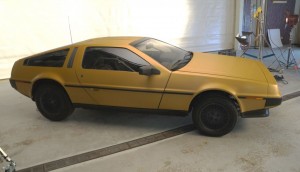 3M’s gold-wrapped DeLorean. Its color was changed to gold with the company’s 1080 vinyl.

3M Window Film took that line quite literally and had the DeLorean wrapped and tinted to celebrate October 21, 2015 – the day Doc and Marty McFly time travel in Back to the Future Part II.

According to the company, there were only three gold DeLoreans ever made by the DeLorean Motor Company—until now. A fourth gold DeLorean was created by using a variety of vinyl wraps along with window film.

Here’s a video of the car being featured on Fox & Friends: