According to the program’s website, the 28-credit certification will prepare students for a career in advanced film manufacturing and related industries in an area that produces more than 30 percent of the world’s coated and dyed film. 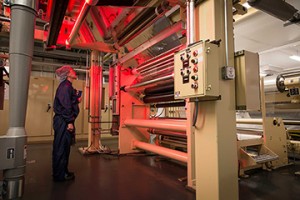 Students at the Center for Advanced Film Manufacturing will have the opportunity to receive training both in the classroom and on-site.

Lisa Lyle of the Martinsville Economic Development Corporation says this program will ensure that Martinsville’s largest employers “will have a skilled workforce and the ability to expand their business.”

According to Lyle, the Martinsville location employs approximately 500 workers and Eastman is projected to invest $40 million there over the next three years “if they can secure more job-ready workers needed to achieve their growth and make these investments.”

Charles Fraley, human resource manager at Eastman, sees the training program as vital to the company’s ability to exist.

“We see a demographic shift in our workforce with baby boomers retiring. New generations of workers don’t have the skills to fill the gap,” he says.

In order to encourage participation in the program, “Eastman [will be] supporting scholarships through the partnership and students interested should work with the community college financial aid office,” says Pat Caldarera, site manager at Eastman Martinsville.

Rhonda Hodges, dean of workforce development and continuing education at PHCC, says this is a good thing for the region.

“I think it [is] so exciting for the community to know that there are jobs available and that employers want to help them get the training to get those [careers],” Hodges said in an interview with WDBJ 7 news.

And careers are what the area needs. In a state with a 4.9 percent unemployment rate, Martinsville, Va. has an unemployment rate of 11.2 percent, according to the U.S. Bureau of Labor Statistics.

Caldarera says, “Applicants who have graduated from the program [will be] guaranteed an interview with Eastman, and if hired, [they] can expect a highly competitive starting wage with a staged progression over a 4 year period … Motivated individuals have a multitude of career development opportunities spanning several promotional paths.”

The program is slated to start in August. More information can be found at www.advancedfilm.org.