At the recent 18th China International Expo for Car Care Products, Israeli Ambassador to China Matan Vilnai showed support for Hanita Coatings. The ambassador took part in a live product demonstration, smashing panes of glass protected by Hanita’s automotive safety film. Additionally, in a speech to the crowd, he commented that he was familiar with Hanita security window films from his time as Major General in the Israeli Defense Forces. 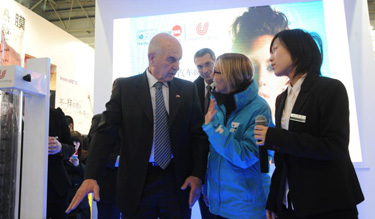 Vilnai’s visit to the biggest automotive aftermarket exhibition in Beijing was in support of Israeli products sold in China, so often subjected to counterfeit and brand identity theft.  He spent much of his time at the King Films booth, where Hanita Coatings’ Lior Chemke explained Hanita automotive solar control and security automotive window films, solely distributed in China by King Films.

In an interview with the local media, Chemke emphasized how much she appreciated the diplomatic support at the show and the importance of Ambassador Vilnai’s presence in boosting awareness of Israeli product innovation.

In addition to the diplomatic attention, the company also has released a new marketing video campaign, focusing on the features it says sets it apart from other architectural films.

“The message we’re making is that SolarZone window films can stop up to 80 percent of all solar energy coming through windows, significantly reducing solar heat gain, cutting cooling costs by up to 30 percent, saving money and energy outlay. For a good return on investment, and effective reduction in the building’s carbon footprint, use an exterior solar control film from the Xtra or XTRM range. And when glass safety is an issue, then we recommend SolarZone Safe films, combining the reinforced protection of SafetyZone security laminates with heat rejection, UV block, and appearance of SolarZone solar control films. A full range of film thicknesses provides the appropriate solution for different security threats,” according to a Hanita statement.