Editor’s Note: In a new blog called Upside-Down Thinking, Patric Fransko will begin writing a series of pieces dedicated to thinking outside the box in the window film industry.Fransko has been in the window film industry for nearly 15 years. In that time, he has founded and run several succesful companies that continue today and is the current chief marketing officer at Interwest Distribution Co. and Interwest Tools. Additionally, Fransko is the founder and president of the Window Film Professionals Group on Linked In, Facebook and Twitter. For his first installment he discusses dot matrix dilemmas. 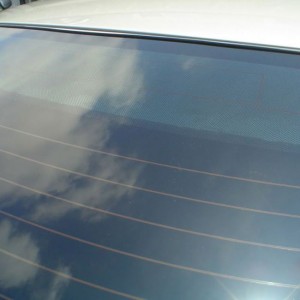 Anyone who has installed window film on a car is familiar with the dilemma of how to get the dot matrix areas to look good and consistent. Installers have tried everything from sanding the matrix to using glue sticks to combat the issue. Some have given up completely and just install solid black vinyl over the matrix area and but seam the window film to the vinyl.

Why is this issue so difficult to overcome? Well, with the exception of installing vinyl, one strategy will not work for all situations. In an effort to add some clarity to this issue, I wanted to detail out the various issues with dot matrix and the primary ways that installers are currently addressing the dot matrix dilemma.

To begin with, there are two main issues that installers deal with regarding dot matrix during a window film installation. The first is getting window film to stick properly in the matrix area. Often the film will want to peel back and not stick in this area. After discussing this with people in the glass industry, this issue stems from the fact that many of the materials that matrix is comprised of are designed to be resistant to things adhering to them. As a result, we are fighting the natural tendency of the material by trying to adhere something to it. As an illustration, think of trying to get things to stick to the inside of a Teflon-coated pan. Try as you might, things just do not want to adhere.

The second issue is that the installer can get the film to adhere to the dots, but the film appears to have a “silvering” in the matrix area when viewed from the outside. (See Picture) To make matters worse, this “silvering is often not uniform or consistent across the window drawing even more attention to this problem.

So, what can we do to combat these issues? Let’s tackle the first issue of the film not wanting to adhere to the matrix. The most common strategy for this is to use something to scuff the surface of the matrix area knocking off the top coat and creating a rougher surface that the film has an easier time adhering to. This method is often used in combination with a adhesive promoting solution. The idea is to make the material more conducive to the film adhering and then giving the adhesive the added boost of an adhesion promoter. This tends to work well at getting the film to stick to the glass, but the issue of “silvering” might still be present.

What causes the silvering? The basic explanation is that the profile of the dots serve to keep the film floating above the actual surface of the glass. The dots are spaced too closely together and the film rides on the top of the dots unable to deflect into the valleys between the dots to stick to the actual glass. The resulting gap between the glass and the film in these areas is what you are seeing when “silvering” is present. This is not an adhesion problem as the film is adhering to the matrix. This is a problem of the film not being able to deflect into the small areas between the dots, so it rides along the tops. You may notice that as the film cures that you can push down in these areas and reduce or eliminate the silvering. This is because once the mounting solution is completely dried out you can often push the film into these valleys and get it to stick to the glass. Often, even you are successful getting this to occur, the “silvering” will return to these areas again as the film cannot maintain adhesion in these valleys.

Other techniques to try and solve this problem would be sanding the dots down so the film can deflect into the channels easier. Also the use of a glue stick that essentially fills in the channels with glue so that you do not see the silvering. The film is still riding along the top of the dots, but the glue has been forced to flood the channels so there is no gap between the glass and film to cause the silvering. This technique can work, but it can be messy if the glue is over applied, and the glue can turn color with exposure to the sun creating a bigger eyesore down the road.

So, I am not sure that I have helped solve the problem in this blog post, but I hope I at least shed some light on the issue and several techniques to tackle the problem. I would love to hear back from you regarding successful strategies you have to deal with this pesky problem of our industry.

After building several businesses in both the B2B and B2C environments utilizing digital marketing and social media platforms, Patric launched his own digital marketing agency, Eye Magnet Management, in 2015. This business has rapidly grown to represent the digital marketing efforts of some of the largest names in the window film industry as well as numerous other clients in industries as varied as golf, clothing, art, international freight and restaurants.