Today’s finalists have been announced for the 2013 International Window Film Conference and Tint-Off.

In the Architectural Division, four finalists were named. They are Ronnie Zdenek, president and owner of SPF Window Tinting in Hattiesburg, Miss.; Hann Kim, reigning 2012 champion and CEO of STM Solar Control in Los Angeles; Chris Brooks, the 2012 second-place winner and co-owner of Kauff’s Tint and Graphics in Palm Beach, Fla.; and Matt Adams, owner of Adams Window Tinting in New Bern, N.C. 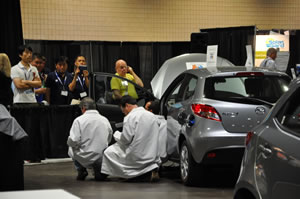 After rounds of competition, four finalists have been named in the architectural division and 12 in the auto division. Winners will be announced tonight.

At stake is $5,000, a gold medal and trophy, as well as bragging rights as the “World’s Best Architectural Window Film Tinter.” Second place will win $1,500 and a silver medal. Third will receive $500 and a bronze medal.

Finals will be held on the show floor today. Winners will be announced at tonight’s Gala Awards Reception and Ceremony. Stay tuned to windowfilmmag.com for the announcement later today.